Britain’s temples of seaside modernism are often symbolic of the yearning to escape, yet they represented different aspects of the nation’s restless spirit – the De La Warr Pavilion in Bexhill – an exemplar of the socialist, international, ‘improving’ spirit of modernism, and Margate’s Dreamland – a candyfloss obverse of the same coin. Both completed in 1935 and both fallen into disrepair at the century’s close, each has since undergone major restoration and now reflect some of our 21st century cultural aspirations.

Many people might be surprised to learn that something as elusive and ephemeral as ‘Dreamland’ is in fact an amusement park anchored on the Kent coast. There has been a fun-fair on the site since the 1880s but the Dreamland concept was not created until 1920, when a substantial wave of redevelopment led to the construction of the now Grade II* listed wooden rollercoaster. This dryly named ‘Scenic Railway’ was apparently inspired by the owner’s trip to New York’s Coney Island. Such an antecedent might seem overblown until one sees photos of Margate beach from that era, and one realises that literally millions of people visited the town. From 1920 onwards the site grew in size and scale under massive investment from the owners, the Iles family, and in 1933 work began on the cinema complex, itself now Grade II* listed.

The complex was designed by noted cinema architects Julian Rudolph Leathart & W.F. Granger, whose other theatre work includes the Odeon Kensington, along with direct input from the Iles family. At a seating capacity of 2,050 it was to be similar in size to other super-cinemas of the period. The first film to be shown on the new screen was ‘The Painted Veil’ starring Greta Garbo on 22nd March, 1935.

Construction is of steel-frame with some really beautiful brown and pink brick cladding, now cleaned up and looking marvellous. Travertine marble steps and panelling were used at the foyer with Expressionist notes to the frontage picked out in concrete. Historic England suggest its design was directly influenced by German cinemas of the 1920s, and cite Dreamland as the first example of Expressionist cinema design in Britain.

The cinema’s most distinctive feature is its tall (25m) brick tower or ‘fin’ which neatly ‘book-ends’ the seafront at the western end, and proudly announces the Dreamland name to those either arriving from the train station or strolling along the front from town. Facing the beach there were originally a public bar on the ground floor and the ‘Sunshine Café’, a large 500 capacity restaurant, on the first floor. Both made use of steel-framed windows to maximise the sea view, but sadly very little of their original interiors remains due to their subsequent re-use.

Decorative work to the cinema auditorium is of very high quality and was provided by Eric Aumonier (whose other works include the foyer of the Daily Express building and the Archer at East Finchley Tube Station) and Laurence Bradshaw (somewhat ironically responsible for Karl Marx’s grave at Highgate). Appropriately their work is largely in the art-deco fantasia style, rather than the bold Expressionist form of the exterior, but for the same reason is perhaps of less interest to the hardened modernist. 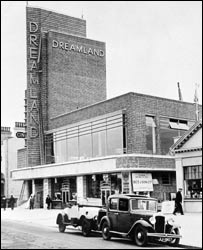 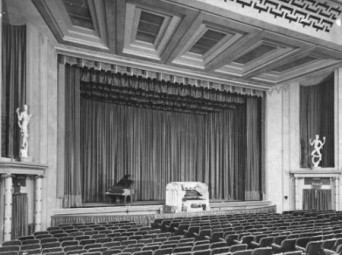 The cinema was closed during WW2 as Britain’s beaches were evacuated and fortified, and during the war the amusement park was commandeered by the armed forces, briefly accommodating thousands of exhausted soldiers from Dunkirk. Interestingly Margate’s wide expanse of flat beach was initially the site of top-secret tests of Barnes Wallis’ bouncing bomb as used in the Dambusters raids, and a description of the Margate tests can be found in Guy Gibson’s war-time memoir.

The Dreamland cinema suffered the same fate as most super-cinemas during the post-war period, and as numbers fell away the cinema was ‘tripled’ in 1973 (this means isolating the balcony or the stalls beneath the balcony and dividing it into two smaller screens). The main screen auditorium was briefly converted to a live theatre in the mid-70’s but soon afterwards became a bingo hall. People are a bit sniffy about bingo halls but they have this in their favour – they probably saved hundreds of Britain’s cinemas from demolition. The bingo hall downstairs/cinema upstairs format lasted until 2006/7 when an exhausted Dreamland was closed.

Happily, under a recent wave of private investment, restoration work began in 2011. However the developers soon got into financial difficulty and the exterior renovations were only completed in 2016 under public ownership after Thanet District Council compulsorily purchased the site. Work to restore the bar, the foyer and the Sunshine Café back to their original appearance is ongoing as of 2017, and the planned restoration of the auditoria will complete the project. Thankfully much of the cinema’s interior remains intact though in need of extensive restoration. 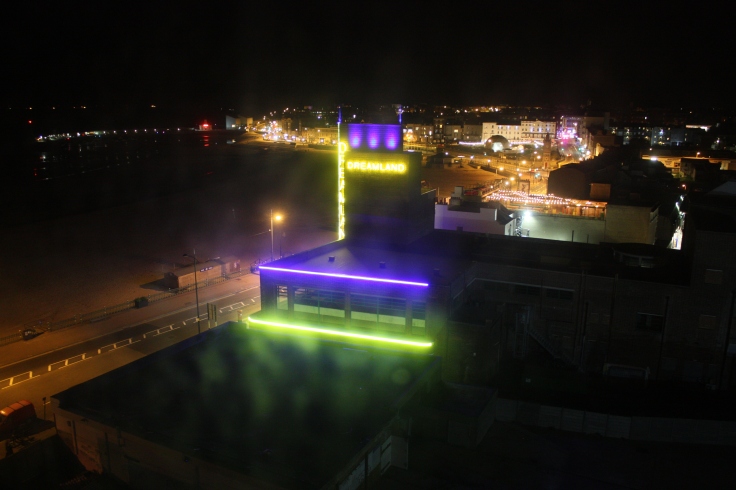 When finished the restored cinema complex will once again work alongside the restored amusement park, now appealingly retro-themed by Wayne Hemingway’s HemingwayDesign group, in what everyone hopes will be a successful commercial venture for the council and the good people of Margate. 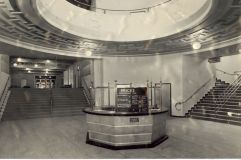