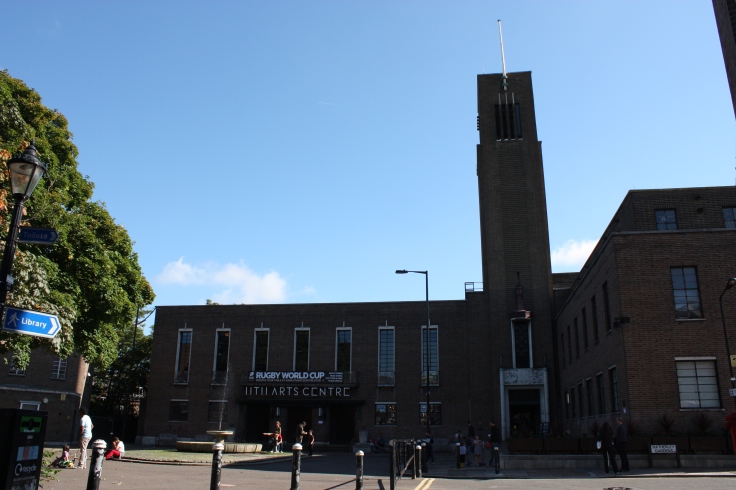 2015 is a significant year for Hornsey Town Hall, not only does it mark the 80th anniversary of architect Reginald Uren’s modernist masterpiece but it may also be the year which sees its long-term future decided. The London Borough of Harringey, the building’s current owners, have put the building and its surrounding land up for competitive tender and redevelopment. If a bid by the Hornsey Town Hall Appreciation Society fails to obtain a moratorium then the part-demolition and redevelopment of the site may commence as soon as the one year lease held by the Hornsey Town Hall Arts Centre expires. 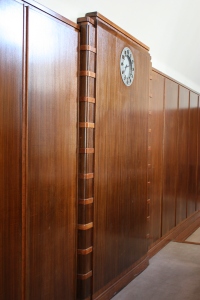 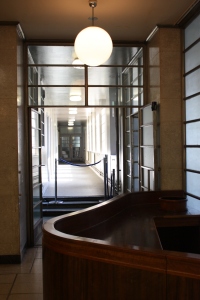 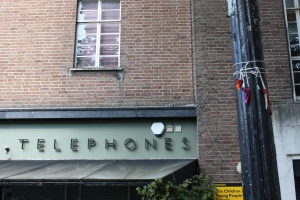 We visited in September 2015 as part of London Open House and were keen to take a look around the inside of the building, particularly the upper floor and former council chambers which are not routinely open to the public. 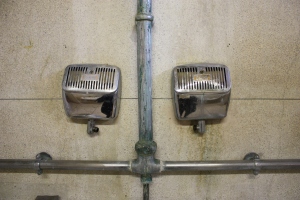 Much has been written about the Town Hall, which is only fitting for a building which some people describe as the first major modernist building in the UK. After a competition held in 1933 Uren’s winning design was completed in 1935 and awarded a RIBA Bronze Medal the same year. Until 1966 the building served proudly as Hornsey Borough Council’s headquarters. Unfortunately, when the Borough of Hornsey became part of the London Borough of Harringey most of the administrative functions were relocated elsewhere and the building, now surplus to requirements, was allowed to fall into desuetude. Rubbish and dead pigeons on the roof blocked drainage channels and the resulting water penetration has damaged several areas, including the main auditorium space. However, it is in part due to this mothballing (and the valiant efforts of a small number of dedicated Harringey Council staff) that so many original features and interior fittings survive intact, and which otherwise may be have been replaced or destroyed. One may even view several well-preserved examples of the original textiles used by Uren including curtains, carpets and wall hangings. 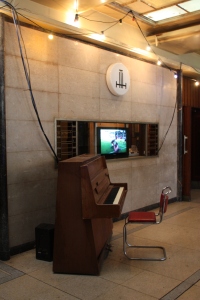 During construction local residents were alarmed by the scale of the building rising in the middle of Crouch End and feared that a factory was about to be imposed upon them. Others did not see the need for a large tower and thought it simply showy (in fact it cleverly houses all the electrical gear and much of the innovative HVAC equipment). In layout the striking courtyard arrangement, with the Town Hall set back from the road and flanked on either side by Electricity and Gas Showrooms, was designed to give an impression of a modern, forward thinking council serving the needs of a growing urban community.

Efforts were clearly made to sympathetically adapt the exterior to the surrounding buildings, or as much as could be done on such a sizable project. Offices are arrange primarily around an inner courtyard to avoid overlooking the neighbouring houses and the fine quality brickwork is certainly more conservative in appearance than would have been concrete or a rendered finish.

On walking around the public spaces and the ceremonial suites one is struck by the delicate use of lighting (Uren made extensive use of light wells to bring natural light into the building) and the high quality of materials throughout. One definitely feels the ‘machine age’ character of the doors and stairwells, but also the respect for, and celebration of, the traditional craftsman. Fine woodwork and panelling is to be seen, particular upstairs in the former council chambers. It really is a beautiful building inside and out and it would be a great pity if the opportunity to redevelop the site as a public events space is lost forever. One can readily sense the pride that went into the building, a pride which is still felt by those who have fought, and continue to fight, for its future as a community space.

The Hornsey Town Hall Appreciation society propose that the building be transferred as a registered Community Asset and as of November 2015 have just submitted a 2200 signature petition to Harringey Council requesting this. Further they request a delay to the disposal process for 6 months while this is considered. They can be contacted via Facebook or at http://www.hthas.org.uk/