The Rundlingsdorf or the “Rundling” is a large circular housing development in Lößnig, a quiet working-class district of Leipzig in Eastern Germany. Perhaps due to the relative obscurity of its architect Hubert Ritter it is not well-known outside of Germany, certainly when compared to contemporaneous developments such as Walter Gropius’ Großsiedlung Siemensstadt. The Modernist Tourists were visiting Leipzig on some important rocknroll business but decided to take our camera over to Lößnig for a nose around. 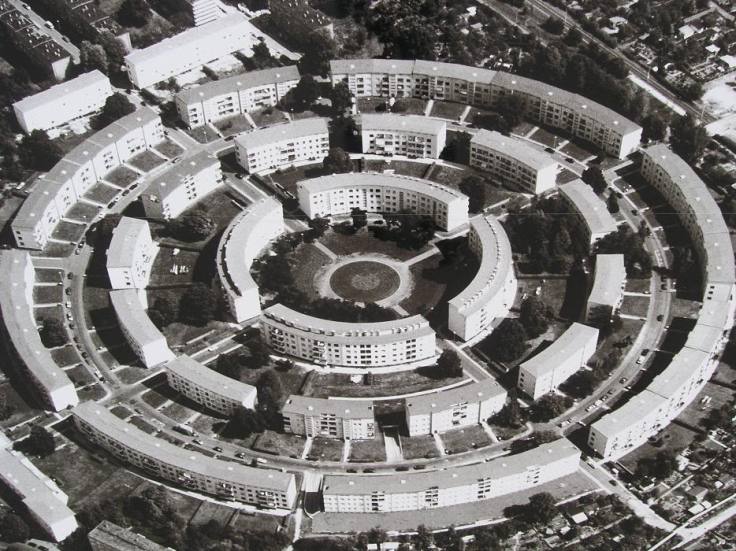 Ritter was appointed as municipal architect and town planner by Leipzig city council in 1924 and soon secured a large green field site south of the city for his development. The natural topography of the site was further enhanced by scaling the rings so that the inner is one storey taller than the outer. On its completion in 1930 the complex comprised of 24 blocks, arranged in three concentric rings, the outer ring having a diameter of 300 meters. It boasted 624 flats with eleven different floor plans, each flat being configured to maximise the available light and avoid north-facing living rooms.

The circular plan clearly breaks with the traditional urban street layout of German cities, and was intended to help focus the community inwards (in a positive way). No doubt inspired by its circular shape and location, the names of its various components are taken from Wagner’s Ring of the Nibelung. The central space (Siegfriedplatz) originally held a swimming pool but is now left exposed and rather forlorn, its scrubby grass an anti-climax, a lost opportunity.

Originally from Nuremburg, Ritter studied at the Technical University of Architecture in Munich and after graduating worked in Frankfurt, Munich and Cologne, before securing the appointment in Leipzig. In 1927 he hosted an international conference on modern housing and worked alongside Gropius on the committee of the Research Centre for Efficiency in Building and Housing.

Ritter does not seem to have got on well in Saxony as the city did not renew his contract after 1936. In 1941 he accepted an appointment in Luxembourg, and although he had hoped to return to Leipzig after the war (by then in East Germany), he relocated instead to Munich in West Germany, where he died 1967. His work in Leipzig remains as a testament to his progressive thinking and willingness to challenge the status quo.

If you’re visiting Leipzig we also recommend a visit to the Grassi Museum. Ritter worked as supervising architect on the museum, which was built between 1925 and 1929, and we believe he was responsible for strikingly expressionist ‘Pfeilerhalle‘. In 2014 we were lucky enough to visit the Grassi for their Thonet exhibition, which was sponsored by Thonet and included a large selection of chairs from their historical archive.